I’m delighted to have an essay in the edited collection Anticipatory Materialisms in Literature and Philosophy, 1790–193Oedited by Jo Carruthers, Nour Dakkak, and Rebecca Spence, which has just been published with Palgrave Macmillan. My chapter examines the relationship between mobility and materiality in a text of the Great Exhibition year, more on which in the abstract below. I’m very proud to be part of this fantastic collection and grateful to the editors for their work throughout the process.

Mobile materiality: the Great Exhibition of 1851 and the mobile-material relations of Henry Mayhew’s 1851: or, the Adventures of Mr and Mrs Sandboys

This chapter examines a novel of the mid-nineteenth century that anticipates fundamental questions about the relationship between materiality and mobility, Henry Mayhew’s 1851: or, the Adventures of Mr and Mrs Sandboys. Written in the year of the Great Exhibition of 1851, the novel resonates with contemporary concerns about the materiality of mobility, the mobility of material culture, and the status of the human in a world overrun by objects on the move. In so doing, it provides ways of rethinking the relationship between mobility and materiality in the nineteenth century, and in turn, allows us to reconceptualise the theoretical connections between mobility and materiality today. 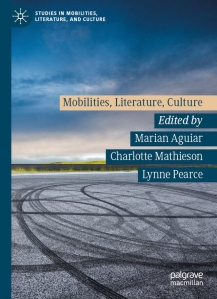 The collection came out of a conference of the same name held at Lancaster University in April 2017, which proved to be a really inspiring event in establishing the relationship between mobilities studies and literary and cultural studies, and we’re delighted that the book reflects an exciting range of topics and methodological approaches. The book covers themes of mobility and nation, embodied subjectivities, the geopolitics of migration, and mobility futures. We have also written a substantial introduction with an expansive bibliography which we hope will be a useful resource for scholars, especially those who are new to the field. The book can be purchased as an e-book or hardback on the Palgrave website.

We are always happy to receive expressions of interest and proposals for the series, which thus far has publications on the hotel in modern literature, migration and the body, automobiles in French Indochina, and memory and the life course in 20th-century literature, with more works on topics including aeromobilities and roadside spaces on the way. Please do get in touch if you would like to discuss a potential proposal!

Having posted already about a new Charlotte Brontë publication at the start of July, the month finished with a second: a chapter in this new book, Charlotte Brontë: Legacies and Afterlives, edited by Amber K. Regis and Deborah Wynne and published by Manchester University Press. The book traces Charlotte Brontë’s legacies from the time she was writing to the present day and I’m delighted to have my work included among a fantastic set of contributors.

My chapter, titled “Brontë countries: nation, gender and place in the literary landscapes of Haworth and Brussels”, looks at how these two locations developed distinctly different Brontë afterlives in the 19th century and beyond. Haworth is familiar to many as a key Brontë location, and the Yorkshire landscape of “Brontë country” is central to the enduring cultural myth of the Brontës. Even before Charlotte Brontë’s death in 1855, intrigued readers had begun to visit the Parsonage, and the publication of Elizabeth Gaskell’s Life of Charlotte Brontë in 1857 instigated a steady stream of visitors that has continued to the present day, generating a significant tourist industry at Haworth.

Brussels also holds an important place in Brontë’s work (as my last article explores, it afforded Brontë new opportunities for urban wandering that shape her novel Villette) and while on a much smaller scale, generations of readers have gone in search of another “Brontë country” to be traced in the city’s streets (as I have too – I blogged a photo-essay of Brontë’s Brussels here, and reflected on “Finding Brontë in Brussels” here).

In this essay for Charlotte Brontë: Legacies and Afterlives I explore the history of literary tourism in Brussels, focusing particularly on late-nineteenth century accounts. I look at how the unofficial and less scripted nature of Brussels literary tourism – tourists typically make their own way through the streets, a copy of Villette in hand serving as guidebook – allows instead for alternative narratives of Charlotte Brontë to plotted into the cityscape, narratives which especially emphasise connections between gender, identity and place. I suggest that at the moment of her bicentenary, these narratives offer an important complement and counterpart to the dominant cultural image of Brontë as she is associated with Haworth and the Yorkshire landscape, and offer new perspectives from which to consider her works and their afterlives.

My article “‘A still ecstasy of freedom and enjoyment’: Walking the city in Charlotte Brontë’s Villette” has been published online  in the Journal of Victorian Culture. In this piece, I suggest that Brontë’s writing of women’s city walking makes a significant contribution to the idea of the flâneuse. Through a reading of Brontë’s letters from Belgium and her 1853 novel Villette, I argue that Brontë writes herself and Lucy Snowe into a growing canon of strolling city women, and that she brings a new perspective to the construct of the flâneuse through an embodied articulation of urban city wandering.

I start by looking at the prevalence of travel in Brontë’s letters, locating her within a new wave of women on the move in the mid-nineteenth century. There is a competing tension between the desire for mobility – “such a strong wish for wings” – and the reality of containment within the home, that runs through her letters, and this goes on to shape her fictional writing.* I then turn to her letters from Belgium: the city afforded Brontë new opportunities for “threading the streets”, and she starts to develop an attentiveness to the relationship between body, mobility and space that is developed more substantially in Lucy Snowe’s city encounter in Villette. Here, the thrill of city walking – “a still ecstasy of freedom and enjoyment” – emerges as an acutely embodied experience, and I argue that through this Brontë carves out a new discursive space for her woman walker, shifting from the spectatorship of the flâneur to a more fully sensory experience of the urban environment. This becomes crucial to the strong sense of autonomy and agency that walking affords women; at the same time, Brontë recognises the difficulties of mobility for women, and in the final section I look at how she negotiates this tension through highly embodied accounts of Lucy’s wandering in later sections of Villette.

* I explore this trait in Jane Eyre in my book.

The special issue of the Journal of International Women’s Studies, featuring winning and shortlisted entries from the 2016 Feminist and Women’s Studies Association’s Annual Student Essay Competition, is now published. The issue is co-edited by me and Laura Clancy, and this was the last round of the competition that I worked on before moving to my current role of Chair of the FWSA. Once again, it was a pleasure to work on the competition and it’s wonderful to see these entries published.

This year’s competition is now open, with a deadline of 5th May: full details on the website.

Two book reviews published this month: my review of Jude Piesse’s British Settler Emigration in Print, 1832–1877 is now available in Literature & History 25.2, and my piece on The Brontë Sisters In Other Wor(l)ds by Shouhua Qi and Jacqueline Padgett is in the latest issue of Victorian Studies (58.4).

This one has been a bit quiet for a while as I’ve been busy with a couple of other publications since, but my first edited collection Gender and Space in Rural Britain, 1840-1940 which I co-edited with Dr Gemma Goodman (Warwick), is now available in paperback for £34 from Routledge.

The collection was generously reviewed earlier this year by Josephine McDonagh in Victorian Studies 58.2 (pp. 383-385).

At a glance, the contents are as follows:

Geographies of Nation and Empire

Historian of the Victorian Working-Class Bedroom