I was recently interviewed by Dave O’Brien of Goldsmiths University about Sea Narratives: Cultural Responses to the Sea, 1600-present for New Books in Critical Theory. The podcast is available here and can be downloaded or streamed.

What is the relationship between the sea and culture? In Sea Narratives: Cultural Responses to the Sea, 1600-Present (Palgrave, 2016) , Charlotte Mathieson, a lecturer in English Literature at the University of Surrey, assembles a new collection of essays to explore this question. The book develops the concept of a “sea narrative,” thinking through the connection between this and a variety of forms of cultural production. The essays are eclectic, but unified, reflecting the emerging interest in both the subject and the approach the book uses. The book travels across the globe as well as across the centuries since 1600, taking in French accounts of the Atlantic crossing; prisoners of war; newspaper articles; Soviet technology and propaganda; Irishness and Ireland’s sense of itself; Du Maurier’s understanding of the coast; A S Byatt’s work; the idea of the Anthropocene; and “coastal exceptionalism.” Each essay is fascinating in its own right, but the collection builds to reorientate the study of the sea for historians and literary scholars, as well as any academic interested in how we narrate and culturally produce the sea.

Many thanks to Dave for the opportunity to speak about the book.

UPDATE: the CFP deadline for the Mobilities, Literature, Culture Conference has been extended to 15th December 2016. Email submissions to mobilitiesconf@gmail.com 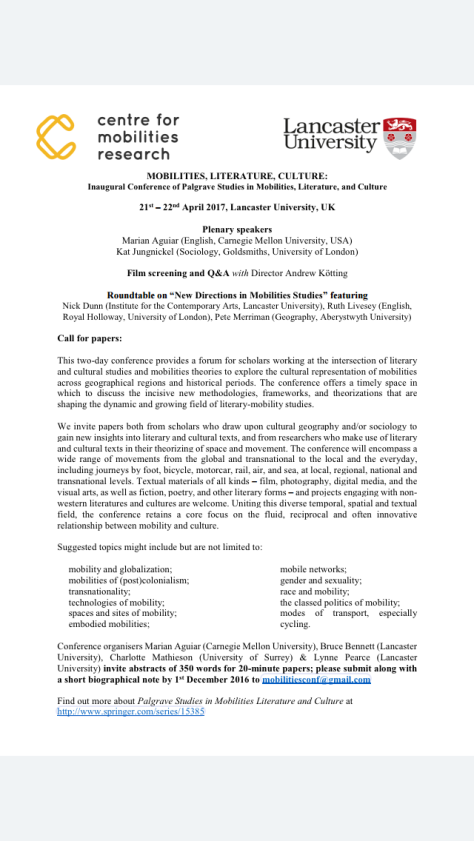 Historian of the Victorian Working Class