Yesterday (31st March) marked the anniversary of the death of Charlotte Brontë, and it is fitting that I have just returned from a weekend exploring an oft-overlooked part of her life: Charlotte Brontë’s time in the city of Brussels. Although it is well known that two of her novels, Villette (1853) and The Professor (published 1857) are based on her time as a student and teacher in the Belgium capital, the importance of Brussels is typically given less attention other than as a topographical reference-point for her novels. In my research I’m exploring the legacy of Charlotte Brontë in Brussels over the past 150 years, and this visit was the first step in seeing the sites for myself and meeting the Brussels Brontë Group: the group’s regular events and tours bring together people of all nationalities who are united by their love of the Brontës, with a special interest in Emily and Charlotte’s time in the city. I had a wonderful time attending a lecture (more of which in the next post), having dinner with the group to talk all things Brontë and Brussels, and then going on a walking tour of Brontë locations. I also retraced the route alone, and what follows here is a photo-essay of my journey around this lesser-known “Brontë country” – if you’re unfamiliar with the Brontë story, you can start by reading more about what brought the sisters to Brussels, and how it influenced their work, here.

I began my tour in the Parc de Bruxelles, the starting-point of Lucy Snowe’s time in the town of Villette: arriving late at night, an English gentleman guides her through the park where it is “black as midnight. In the double gloom of trees and fog, I could not see my guide; I could only follow his tread” (chapter 7).

The park also makes a later appearance in one of the key episodes of the novel when Lucy, under the influence of an opiate that has excited instead of subdued her, wanders out into the night and finds the park ablaze with a festival, experiencing a vivid sensory overload as she walks through the crowds unseen. She finds herself at “a sort of kiosk near the park’s centre” where “round about stood crowded thousands, gathered to a grand concert in the open air” (chapter 38); the bandstand pictured, built in 1841, would have been seen by Charlotte Brontë:

In The Professor, William Crimsworth’s more leisurely arrival in the city sees him take a brief tour of locations that correspond with this area of Brussels: he describes “what a fine street was the Rue Royale” – the street bordering the park – and “walking leisurely along its broad pavement, I continued to survey its stately hotels, till the palisades, the gates, and trees of the park appearing in sight, offered to my eye a new attraction” (chapter 7). He pauses here as he reaches the statue of General Belliard:

Crimsworth then advances “to the top of the great staircase just beyond, and I looked down into a narrow back street, which I afterwards learnt was called the Rue d’Isabelle”. The steps leading down from the statue are still there, although have been redesigned from the original single column to this double set:

Descending the Belliard steps, Crimsworth finds himself faced by a brass plate inscribed with the words “Pensionnat de Demoiselles”; Lucy Snowe sees a similar plaque upon stumbling into a “very quiet and comparatively clean and well-paved street” (chapter 7). This is indicative of the topography of the area that Charlotte Brontë visited, coming down the Belliard steps into the Rue d’Isabelle where the Pensionnat Heger-Parent was located. This, however, is the site today:

It is a rather uninspiring sight, the result of King Leopold II’s work to improve and modernize the city through a series of projects that lead to the Quartier Isabelle being demolished in 1909; the Pensionnat Heger-Parent was one of the last buildings to survive, but it too was lost a couple of years later. A new series of streets including the Coudenberg (on which I’m standing in taking these pictures) were built, and a number of new buildings including the Palais de Beaux Arts (Bozar) – the rather more attractive building to the right in the pictures above, and shown here from the base of the Belliard steps:

The new street plan is almost entirely changed from the original, and it’s difficult to get a sense of where the Rue d’Isabelle crossed and the exact site of the Pensionnat (the maps in Eric Ruijssenaars’s book are extremely helpful in this respect). Roughly speaking, the Pensionnat would have crossed lengthways over the small square, with a walled garden extending into the site of Bozar. On the side of Bozar, if you look closely above a window near the door, is a small tribute to the area’s history:

The streets around the Pensionnat site are also much changed, but small glimpses of the era remain. A small section of the Rue Terarken, just a few steps away from the Pensionnat, has survived and gives a sense of what the area would have looked like when the Brontë sisters were there: 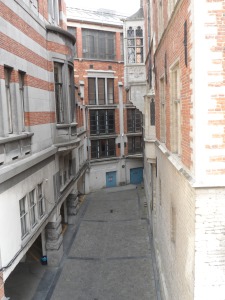 The street is narrow and close, with the overhanging buildings adding to the sense of proximity; it also shows the difference in depth of the past topography of the area, as the photo above is taken from the current street level, and a series of steps descend into the Rue Terarken.

If you look very closely at the back of the Rue Terarken, you will see a familiar site in an unlikely place:

Between those two delivery doors is this blue and white plaque dedicated to the Brontë sisters:

While the brass plate on the side of Bozar represents the official recognition by the Bronte society, this plaque is the personal tribute of a local artist who felt that the official plate was not quite enough: this one is designed to replicate the blue plaques that commemorate historical houses in Britain, and while it may be tucked away in a quiet corner, it is a fitting reminder of the old Quarter.

Beyond the Pensionnat area, a few more glimpses of the Brontës’ time here can be found. There is the Protestant chapel where Emily and Charlotte worshipped each Sunday:

Readers of Villette will also remember that another church figures as one of the novel’s central sites: the Catholic cathedral where Lucy finds herself, after a feverish walk through the city streets and, in lonely desperation, confesses to the Priest. Charlotte similarly found herself, one evening in the summer of 1843,visiting the St Gudule and St Michael Cathedral in the heart of Brussels:

There are also the houses of some of the Brontës’ friends in Brussels, including 11 Rue de la Régence, home to the Dixon family and inspiration for Madame Walravens’ house in Villette:

And finally, the Hôtel Cluysenaar, now the Hotel Astoria, which inspired the Hôtel Crecy in Villette:

I hope this post may inspire some readers to search out these sites, and the Brontë  group,  if you are visiting Brussels; and if the prospect of a visit is not possible then I’d highly recommend Eric Ruijssenaars’s Charlotte Brontë’s Promised Land: The Pensionnat Heger and other Bronte places in Brussels and Helen MacEwan’s Down the Belliard Steps: Discovering the Brontë’s in Brussels, both of which have been invaluable to my work.

Geographies of Nation and Empire

Historian of the Victorian Working Class