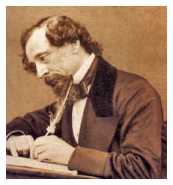 Yes, it really has been one year today since the start of the bicentenary of Charles Dickens – and no, I’m not about to suggest that we start another year of celebrations… I did want to take the opportunity to reflect, though, on some of the issues that have been raised over the last year, both in the content of the celebrations themselves and in the wider context of the year as a whole. 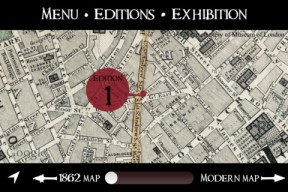 As has been clear in my previous Dickens 2012 posts, one element that has particularly interested me is the emphasis on Dickens and place, and especially Dickens and London, that has been present in many of the bicentenary activities: a whole host of different ways of connecting Dickens and London, from tours that root (/route) Dickens firmly in the material landscape of the city, to digital media forms that offer truly mobile yet completely dis/non-placed experiences of “Dickens’s London” across the globe. I’m really interested in thinking further about the what and why of these forms, particularly in terms of issues around nation that I’ve raised before, but also with regards to ideas of impact: why this emphasis on place and what does it tell us about the types of cultural activities that we value? What impact has this had on the public understanding of Dickens?

There are wider questions too about the impact of Dickens 2012 and how this has shaped the cultural imagination of Dickens. Was it too much and are we all just suffering from Dickens fatigue now? Is there the possibility that Dickens overkill has had a negative or detrimental effect? And at what cost the over-investment in Dickens 2012? Dickens didn’t need putting on the map, and a whole host of other writers have been dwarfed in his shadow this year, not least those whose bicentenaries also marked significant moments for Victorian studies.

But there is one thing that I think Dickens 2012 offers to scholars of other writers, and that’s a legacy of how we “do” bicentenaries. Dickens 2012 has been marked not just be quantity, but also by the quality and sheer variety of forms through which we’ve been able to engage with Dickens’s life and works: a whole host of innovative, engaging and insightful documentaries, podcasts, lectures, talks, digital media, mobile apps, maps, have really expanded the possibilities – and I think there’s something about the collective proliferation of the focus on Dickens that has been particularly interesting and indicative. It’s not just public engagement either, and within academia we’ve seen discussions of research take on exciting new forms, from the 4-day travelling conference that gestured towards the internationalism of Dickens’s works and Dickens scholarship, to the Dickens’s World online conference that went a step further in enabling a truly global discourse of Dickens to emerge. We can but take from this the potential and possibility for other writers too, and use Dickens 2012 as a model for future bicentenaries.

I think, too, Dickens 2012 has opened up the potential for new lines of inquiry between critical and cultural debate: the year has provided a wealth of material for thinking about “the idea of Dickens” as a collective form. As I’ve gestured towards in this and other blog posts, and am seeking to do in my new research, Dickens 2012 has shown how public engagement is not just useful for the communication of research but might also be taken as an indicative source of analysis – and not just at its most obvious level in terms of reading contemporary culture, but also by using this understanding of our own times to open up new ways of interrogating facets of the Victorian period.

A year ago I posed the question “so now what?” After Dickens 2012, what’s next; Bronte 2016? Dickens 2012 has continued to open up more questions than answers, but I think it is clear that the time is now to start reflecting on what the year has given us, what ideas it has produced and developed, as well as to seize new possibilities for the future celebrations of other authors. At 201 Dickens might feel like especially well-trodden ground, but the space remains for mapping new movements and forging new directions in our interactions with the Victorian past.

5 thoughts on “Dickens at 201 – reflections on the bicentenary year”

Historian of the Victorian Working-Class Home

A Pox on the Patriarchy

but making connections too